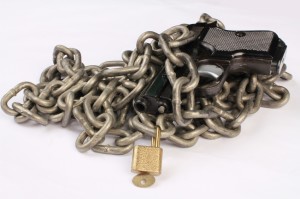 I was under the impression that in the early 90’s the NRA supported universal background checks. Apparently, those facts were skewed by Joe Biden. I did a little research on the Republican platform on Gun Control. I found the cases that the GOP cites from the Supreme Court very interesting. In relevant part, the platform reads:

“we call for the protection of such fundamental individual rights recognized in the Supreme Court’s decisions in District of Columbia v. Heller and McDonald v. Chicago affirming [the right to bear arms], and we recognize the individual responsibility to safely use and store firearms.”

What’s alarming about this are the decisions of Heller and McDonald. While these cases are heralded by conservatives for their textualist interpretation of the Second Amendment, I think very few conservatives actually read the legal conclusions made in the text of either.

Heller is oft misapplied as a blanket safehaven from Federal restrictions on the rights to bear arms. In Actuality, the law challenged in Heller was a firearms registration law imposed by the City of D.C. Handguns were not allowed to be registered (which seems silly), and the law banned any unregistered weapons.  Officer Heller was issued a service handgun and was not permitted to register the handgun, obviously. He argued, with financial support from Robert A. Levy of the Cato Institute, that the Second Amendment protects an individual right by the text alone. This argument prevailed and essentially quashed any belief that MIller required that a person be a member of a militia in order to enjoy the rights afforded under the Second Amendment. Note the caution of the Court in Heller:

“…nothing in our opinion should be taken to cast doubt on longstanding prohibitions on the possession of firearms by felons and the mentally ill, or laws forbidding the carrying of firearms in sensitive places such as schools and government buildings, or laws imposing conditions and qualifications on the commercial sale of arms.”

This paradigm, protecting the individual from the onslaught of State regulation, is precisely the principle behind the legal language of Griswold v. Connecticut, Roe v. Wade, and Planned Parenthood v. Casey.

The historical development of these individual rights begins with Griswold:

“The foregoing cases suggest that specific guarantees in the Bill of Rights have penumbras, formed by emanations from those guarantees that help give them life and substance. Various guarantees create zones of privacy. The right of association contained in the penumbra of the First Amendment is one, as we have seen. The Third Amendment, in its prohibition against the quartering of soldiers “in any house” in time of peace without the consent of the owner, is another facet of that privacy. The Fourth Amendment explicitly affirms the “right of the people to be secure in their persons, houses, papers, and effects, against unreasonable searches and seizures.” The Fifth Amendment, in its Self-Incrimination Clause, enables the citizen to create a zone of privacy which government may not force him to surrender to his detriment. The Ninth Amendment provides: “The enumeration in the Constitution, of certain rights, shall not be construed to deny or disparage others retained by the people.”

“This right of privacy, whether it be founded in the Fourteenth Amendment’s concept of personal liberty and restrictions upon state action, as we feel it is, or, as the District Court determined, in the Ninth Amendment’s reservation of rights to the people, is broad enough to encompass a woman’s decision whether or not to terminate her pregnancy.”

and Casey more clearly articulates the state’s rights in light of the patient’s right to privacy:

“…viability marks the earliest point at which the State’s interest in fetal life is constitutionally adequate to justify a legislative ban on nontherapeutic abortions.”

This is the crux of my thesis, I believe. Both parties, Republican and Democrat, seem to lose their grander philosophical focus when dealing with the issues of guns and and abortion. Democrats lost their push for a universal background check and national gun registry because to pass such laws would be to tread on the very right to privacy that they fought so heavily to protect with regard to reproductive rights. Comparably, the Republican platform’s dedication to the right to bear arms must be viewed in light of reasonable limitations, as is expressed by Justice Scalia in Heller. The State’s interest in safety must be balanced with the individual’s interests in privacy.

Applying these principles, the Republicans and Democrats can both recognize the morally objectionable and safety hazards of Doctors like Gosnell, and a State’s ability to restrict his conduct and hold him responsible for any crimes he may have committed. All the while, both can recognize that there is a point in time where a State has no business regulating our conduct. I am of the opinion that, if you’re going to be logically consistent, Democrats must embrace gun ownership as a private right and Republicans must treat women’s reproductive rights with the same level of privacy afforded gun owners. The reason being, both are protected by the Fourteenth Amendment.

Previous: Warrant Required for Drug-Sniffing Dog
Next: Zimmerman Can’t Stand His Ground With “Stand Your Ground”