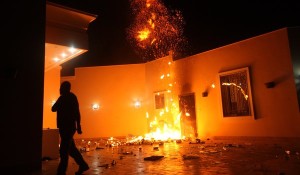 Live in the studio, Travis, of tboneAfterDark, and by phone, Will, of restoreLIBERTY debate the issue of the Benghazi investigations.

On September 11, 2012, the U.S. Consulate in Benghazi, Libya was attacked by between 120 and 150 armed persons. A raid then lasted for nearly 6 hours, at the end of which the building was burned, and a diplomat and two service persons were killed.

Since, Congress has conducted 9 investigations. Republicans have alleged State Department misconduct in everything from the initial reports released to the public, the cause, nature, and reasoning behind the attack, the preparedness and security and military presence and effectiveness in the region.

The President, Former Secretary of State Hilary Clinton, and high-ranking officials within the Executive branch all maintain that this was a breakdwon in communication and information gathering in the face of a “fluid environment.”

Equal time is allotted to each position with myself as the moderator. Listen Friday for the full debate. for now, check out this neat promo I made.