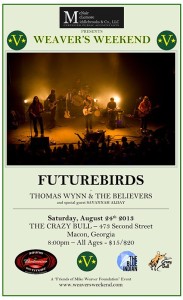 Tonight is the concert for the  Sixth Annual Weaver’s Weekend in Macon, Georgia at the Crazy Bull. It’s a great event, featuring the Futurebirds, Thomas Wynn and the Believers, and Savannah Alday. The show is sponsored by the Friends of Mike Weaver Foundation, a non-profit organization dedicated to the memory of a young man who’s life was cut short.

I have been granted the privilege to live broadcast this event on The David Dorer Show (I presume because of the successes of our Bragg Jam live broadcast and because of my status as writer for sponsor, The Blue Indian. Thanks, Sean.).

Tune in here for the show. Live tweet me at @DavidTDorer. I’ll retweet photos from #WeaversWeekend.

As the show gets underway at about 8PM, this will be a live feed.