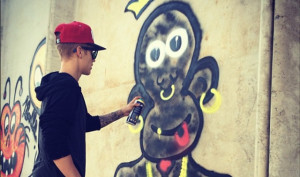 A Federal Judge rejected the settlement of concussion claims by former NFL players, stating that he feels the settlement figure is “too low.”  While in one hand, I like the streak of Federal Judges not letting companies settle for way less than what they owe, at the same time, a bunch of over-grown neanderthals smashing their heads into the heads of other neanderthals want more money? I want money!

Justin Bieber’s house was raided today in connection with over $20,000.00 worth of property damage to his own neighbor’s house, by way of egging it, like an idiot. Cocaine was found in plain view, and, Biebs’ friend was arrested. What an idiot.

And, I’m not going to joke about this because it’s really a terrible case. In fact, tomorrow, for my Talking Law segment I am going to discuss in detail 1983 Claims and how a person can sue law enforcement for police brutality; however, it’s important for you to know that  Kelly Thomas was a mentally disabled man who was beat to death by six cops, and two of those cops were found not guilty. Charges were dismissed against the rest.

This matter is too serious to joke about, so I’m just going to say my heart is with Mr. Thomas’ family, and may he rest in peace, despite this injustice.