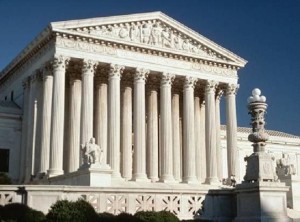 Yesterday news broke that Wal-Mart has been charged by the National Labor Relations Board  for retaliating against its employees. The NLRB says Wal-Mart illegally fired, disciplined or threatened more than 60 employees in 14 states for participating in legally protected activities to complain about wages and working conditions at the nation’s largest retailer. Specifically, Wal-Mart engaged in threatening conduct in response to Black Friday Strikes over better working conditions. Next up will be a hearing in district court.

The Supreme Court issued an incredibly conservative restriction and total revision of the law on the power of a U.S. State Court to hold a foreign company liable for damages in Daimler AG v. Bauman. The breakdown of the case is this (case cites and evidence in the links):

Argentinian Plaintiffs tried to sue Daimler AB, a German Corporation, in a California State Court for human rights violations that occurred in Argentina. They did so by saying that 1) MBUSA, a subsidiary of Daimler, did a lot of business in California; 2) that Daimler is responsible for the conduct of its subsidiaries; 3) Daimler is therefore subject to General jurisdiction in California; and, 4) Daimer can be required to pay what it owes for the atrocities it committed in Argentina.

Where there was argument, and disagreement among the lower courts, was which test to apply when determining whether a parent company is responsible for the conduct of its subsidiary. Justice Ginsberg’s opinion for the entire court disregards this idea entirely.

What she does is essentially rewrite the idea of general jurisdiction. Justice Ginsberg says that a corporation can only be subject to suit where it is “at home”: i.e. where it does business or where it is incorporated. Also, they can be subject to a lawsuit where the subject of the lawsuit occurred.

It’s a fascinating case. Definitely worth the read.