Demand for oil grew has recently grown at the slowest rate since 2009, to 92.7m bbl/day, half of the increase projected.   Oil prices per barrel fall to four year low of $83.37 at the London MEX, and a two year low of $80.01 at the New York MEX. Things have gotten weird.

OPEC upped output in Sept. Libya has come back online. Iraq’s largest fields are coming back online. Saudi (1st in OPEC) and Kuwait (3rd in OPEC) have said the price slump doesn’t warrant production cuts. Reuters exclusively reports that Saudi is OK with prices below $100/bbl for a year, if not two, if not more. All the while, oil demand is falling in the US as well as other larger markets in China and Germany.

We must conclude then, that this price slump is intentional. Something in the calculus of oil and gas prices has fundamentally changed.

Most of the analysis to explain this price slump focuses on what will happen to domestic shale firms, which is easily summarized as they’re getting clobbered: shale production is based upon about a $90/bbl price. This line of argumentation is taken further and a thesis is developed that OPEC is driving down the price to destroy US producers.This doesn’t hold water.

Saudi is our newest friend in the fight against ISIS and Syria. It cannot be overstated the turn of events for Sunnis to fight Sunnis alongside Western apostates. Relevant here also is that the UAE also joined the coalition against ISIS. A Saudi prince and a female UAE pilot flew a joint sortie against ISIS positions; this may be symbolic. But again, it is a huge turn of events for a Saudi prince to fight a war, as equal to and brother in arms with, a woman. Women aren’t allowed to drive cars or walk around unescorted in the Kingdom, remember. The Saudi clerics may be misogynistic, but the political leaders of the House of Saud are much more farsighted than to attack their best customer. Saudi also helped us in our Gulf War One fight against Hussein, immensely to investigate the Sept 11, 2001 attacks, and again in Gulf War Two, a/k/a OIF; Qatar and UAE have provided bases and support for OEF. Saudi, despite being ideologically opposed to many things, are not our trading enemies. Far from it.

Therefore, we step back and look to who is harmed by low oil prices from a geopolitical viewpoint. 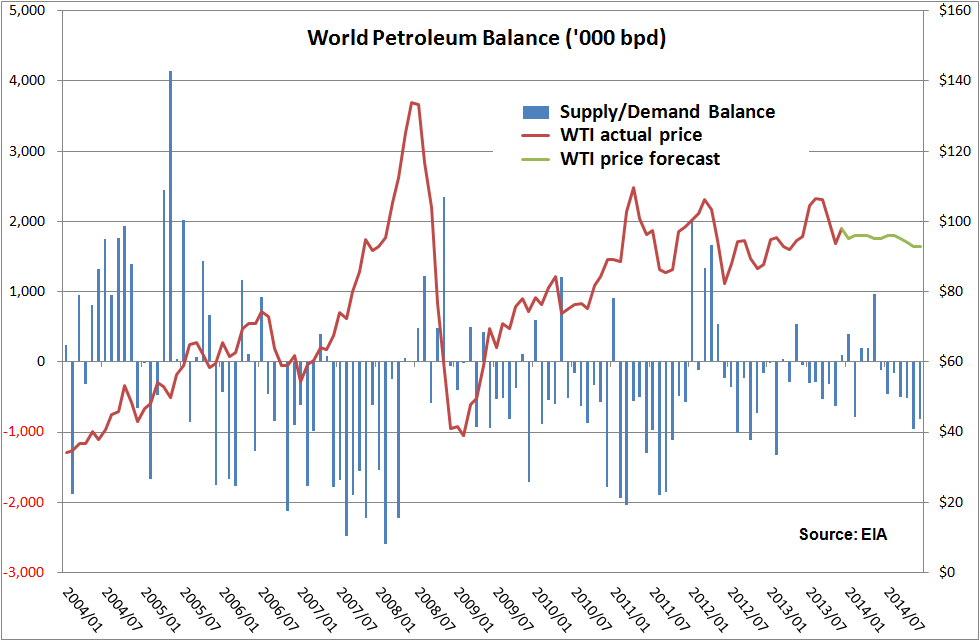 Russia has supplied Europe with most of it’s natural gas for a long time. However, Russia and Europe aren’t happy with each other because of the Ukrainian situation. Russia has an out, namely, China: they signed a $400b natural gas supply deal over the summer. Good one, Putin, almost as good as The Twelve Labors of Putin (which is hilarious).

Turning to oil, consensus is Russia’s budgeted breakeven point is correlated with a price per bbl of oil of $100, if not higher. Relevant here also is that the Treasury Department has, as part of the sanctions against Russia, estopped all exportation of petroleum or natural gas equipment or know how. This is crucial because Putin destroyed his domestic oil companies which cause the incentive to develop new technologies to be replaced by incentive to not get thrown in the stalag.

Iran has a breakeven price of $140/bbl. Mr. Obama don’t like Iran’s government. Venezuela has a breakeven point of $121/bbl. Mr. Obama don’t like that government, either. Other countries which have budget breakeven points above $100/bb: Algeria, Nigeria, Iraq, & Angola. All governments Mr. Obama wouldn’t mind getting squeezed a bit. King Abdullah, too, wouldn’t mind his Kingdom holding a greater share of revenues and profits of the world’s supply of black oil; I daresay he would be chauffeured around by his daughter if Saudi were to become the DeBeers of petroleum.

The world, at least the economic and energy powerhouses, has turned against Mr. Putin. Russia now faces a cold war against the trading world. President Obama and King Abdullah are in a Sun Tzu partnership against Putin. Domestic shale companies take a hit, but that, on the balance, is a good thing. We need to move over to energy sources which have not such a horrible environment impact however possible, and fossil fuels must go.

I also must admit that, under this thesis, which I am loathe to make for whom I must attribute it to, Mr. Obama has created a consensus to markedly improve the world’s position to stop itself from becoming a furnace of death.

NOTE: the author is an enthusiast of all things motor-racing, automobiles and motorcycles, on road and off road, and must disclose he dearly wishes gasoline to always be available for his internal combustion machines.