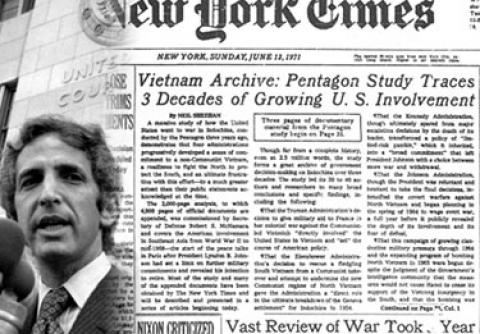 On this day in 1971, the New York Times began its publication of the Pentagon Papers, officially titled United States – Vietnam Relations, 1945–1967: A Study Prepared by the Department of Defense. Leaked by Daniel Ellsberg, the publication outlined an effort to escalate U.S. involvement in Vietnam, including attacks in Cambodia and Laos, while presenting to the American people a separate narrative of deescalation. According to the Times, “the Pentagon Papers had demonstrated, among other things, that the Johnson Administration “systematically lied, not only to the public but also to Congress.”

Last week, Comey testified before the Senate Intelligence Committee that he leaked his private memos to a friend so as to clear the air regarding what he called “lies, plain and simple” from the President about Comey’s termination, and to precipitate the appointment of a special counsel (Bob Mueller). Over the weekend, as opposed to responding to the allegations that he lied, Trump called Frmr. FBI Dir. Comey a “leaker.” Today, Jeff Sessions testified before the same committee that “leakers will wish they never leaked.” Insodoing, he made reference to Reality Winner, the woman currently being held without bail for releasing an NSA document that shows that Russia attempted to compromise voting machines days before the 2016 Presidential election (which of course is contrary to a common GOP talking point regarding Russian meddling in the election).

The government seems to have a history of hiding the truth from its people. Forty years after the Times ran its piece on the Pentagon Papers, to the day, the government finally declassified the truth that Republican and Democratic presidents had both lied to the American public about the war in Vitenam, and there’s now a wall full of names that those presidents owe an immeasurable apology to. This situation is no different, and Reality Winner, James Comey, and the lot will go down in history like Daniel Ellsberg: as the people speaking truth to the people.

Previous: The Politician Treated the Most “Unfairly” – Dorer Daily
Next: How the Death Penalty Works in Georgia | Dorer Daily, Talking Law