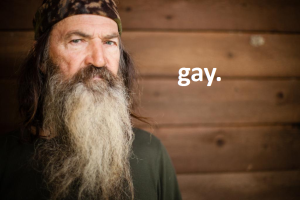 Twitter is a  flutter with the news that Phil Robertson of Duck Dynasty (a show I’ve never watched) gave an interview to GQ (a magazine I’ve never read) and as a result, A&E (a channel I never watch) suspended the reality star indefinitely. The reason? Because, according to A&E:

“We are extremely disappointed to have read Phil Robertson’s comments in GQ, which are based on his own personal beliefs and are not reflected in the series ‘Duck Dynasty,'” …,.”His personal views in no way reflect those of A&E Networks, who have always been strong supporters and champions of the LGBT community.”

I don’t really care if Phil Robertson is anti-gay. It is not at all shocking that a religious zealot from rural, poor Louisiana would espouse such an opinion. It’s his to have, and it’s my right and the right of A&E to disagree with that opinion. I can exercise that opinion by not watching his show (an action I was not intending to do ever, anyway) and A&E can exercise that right by giving him a pink slip. That’s the way it rolls.

See, even this guy who disagrees with A&E’s decision gets it:

Phil Robertson can have his own opinion, just like you have your own @DuckDynastyAE

What concerns me about this whole thing is that Former Governor and Former Vice Presidential Nominee Sarah Palin posted the following to Facebook:

“Phil Robertson and his family are great citizens of the State of Louisiana. The politically correct crowd is tolerant of all viewpoints, except those they disagree with. I don’t agree with quite a bit of stuff I read in magazine interviews or see on TV,” Jindal said in a statement. “In fact, come to think of it, I find a good bit of it offensive. But I also acknowledge that this is a free country and everyone is entitled to express their views. In fact, I remember when TV networks believed in the First Amendment. It is a messed up situation when Miley Cyrus gets a laugh, and Phil Robertson gets suspended.”

Leaders in Government complaining about the First Amendment rights of Mr. Robertson being violated by A&E? Hogwash!
The First Amendment protects individuals from having their speech rights abridged by the Federal Government. Under Gitlow v. New York, through the Equal Protection Clause of the 14th Amendment, States are also prevented from abridging the free speech rights of persons. The First Amendment does not prevent private party discrimination of speech, nor should it. If the government were to prevent A&E from expressing its opinion on Phil Robertson’s opinion, what good would the First Amendment be at all? So long as what A&E does isn’t defamatory. there is no way the government can provide relief to Phil Robertson for him to say whatever he pleases without recourse.
My concern here isn’t the discourse between Phil Robertson and A&E, but rather the fact that leaders that 1) pride themselves on being Constitutional Conservatives and/or originalists; and, 2) praise the private sector for its ability to more efficiently provide the public with its wants, needs,  and desires, are the same leaders that do not really understand the distinction between private action and state action.
The issue here is should someone who clearly doesn’t understand when Constitutionally protected rights are applicable in any given circumstance be permitted to lead our country or our States?  I posit the answer is clear: No. If you don’t understand the difference between private parties exercising their respective rights and Government suppressing those rights, I don’t think you should be allowed to lead the country. Plain and Simple. I feel this way not because I think only lawyers or constitutional scholars should be leaders, but because an egregious misunderstanding of the law spreads confusion to your constituency and does  a grave injustice to the language and letter of the rights protected by the Constitution.
Just look at this guy: