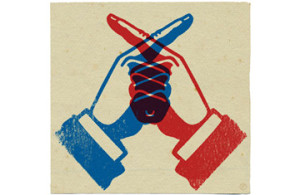 Listen Live at 6PM TODAY! CALL IN at 478-227-3879! I hope everyone had a great holiday season and is ready for a New Year with a new David Dorer Show.

T-Bone (@tboneafterdark), Mr. Bunker (@rsbunker), and Jimbo (@RaginKurhajian) are my panelists on this Wild West Edition, where we will discuss whether conservative political politics is losing the culture war, and whether or not they should be.

Our first issue will be the implementation this week of Colorado’s legalization of marijuana. The cultural effects of one state having free for sale that which could have you incarcerated for 20 years in the state of Georgia clearly will be an issue, but is the war on drugs a war worth fighting, and a war that our political climate wants to fight or can afford? We will take these questions up as well, as sober gentlemen in the south, not hippies in the mountains.

Our second issue is that, for now, bans on homosexual marriage are unconstitutional in the State of Utah. We will discuss not only the legal theories behind Utah district court ruling, but we will discuss whether this battle is one that the Republicans can win, or whether their political philosophy should go the other way.

Finally, the anomaly to the “wild west theme” but not to the “culture war theme” Bill De Blasio became the 109th Mayor of the City of New York, he also calls for a livable wage to be paid to New Yorkers. Georgia has tried to raise the minimum wage above the Federal minimum (but now is trying to prevent what happened in Washington DC where Wal-Marts have to pay living wages). The minimum wage, thusly, will be a topic of debate.